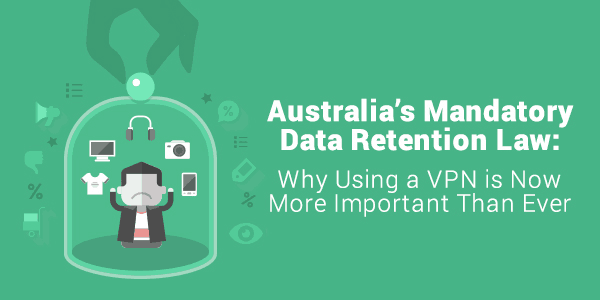 It’s a dark day for online privacy in Australia as the laws passed by the federal government regarding metadata retention in March 2015 finally came into effect today. The newly implemented laws would require Internet service providers (ISPs) and telecommunication companies to collect their customers’ metadata for a period of two years.

The collected data would be handed over to law enforcement and intelligence agencies, if the need arises, to help with their investigations. And to make matters worse, the agencies won’t require a warrant to obtain this data.

While the laws passed by the Australian Federal House of Representatives are meant to curb organized crime and terrorist activities, it’s also being slammed as a major invasion of privacy by experts. Since most criminals and terrorists know how to cover their tracks when it comes to data retention – which the government is pretty much aware of – it’s the ordinary citizen whose data gets collected the most.

What Will Be Collected Under The Metadata Retention Law?

The new metadata retention law in Australia, due to its vague definition, makes things quite confusing when it comes to what is actually going to be collected. What we do know is that metadata collected by ISPs and telecommunication companies will include all your phone calls, texts, emails, all the websites you have visited in the past two years, online financial transactions that you made and so on.

However, the content of your phone calls, texts, and emails won’t be recorded. What will be documented is the identity of the person you’re calling or texting, the location from where the call was made and its duration.

Tim Singleton Norton, a privacy advocate with Digital Rights Watch, recently stated: “So it’s not the actual things you write in your email and text messages and what you’re saying in a phone call, but things like location services, telco towers — it’s all the information surrounding those interactions.”

Pros and Cons of Metadata Retention

As weird as it might sound, there are some pros of metadata retention but not for ordinary citizens. Telecommunication companies sell this data for a hefty price to marketing companies, which is a gold mine for them. This data helps marketing companies to create more customized and personalized advertisements for a particular group of users. It also helps in making more efficient adverts. Moreover, it could help law agencies catch some pretty nasty guys (who are stupid enough to not cover their tracks).

However, it’s safe to say that the cons outweigh the pros when it comes to metadata retention. Storing such high amount of data will attract the most sophisticated hackers from around theworld, as the data by itself would be worth millions of dollars. Telecommunication and Internet Service Providers (ISPs) in Australia have already warned the government of this predicament.

Moreover, the collected metadata can be used by authorities if a police complaint has been made against you. So, be nice to your ex-wife, or a jealous colleague.

How to Avoid Meta data Collection and Retention

If you’re concerned about your online privacy or worried that your personal data might end up in the wrong hands, all is not lost as there are ways to protect yourself against metadata collection and retention. The best and most efficient way to go about it is to subscribe to a Virtual Private Network (VPN) service.

What a VPN basically does is that it hides the websites you visit from your ISP, which stores your browsing history and online activities. So, nothing can be collected if the ISP provider is blinded.

However, one should keep in mind that while there are plenty of free VPNs out there, most of them aren’t exactly secure and therefore not recommended.

Below are the Recommended VPN Services: