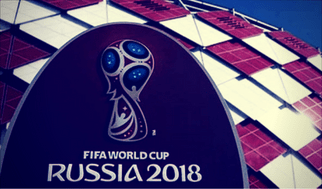 If you are living in the US and are also a diehard fan of football, then you must be itching to watch FIFA world cup 2018 in the USA.

Football is one of the few sports that has a major fan following across the 6 continents. In fact, FIFA fans don’t hesitate for even a single second to spend a hefty sum of money on tickets to watch a match live at the stadium.

Regardless, if you are looking for ways to watch FIFA in the US on your favorite device, you are at the right place. The following guide will discuss how you can enjoy FIFA World Cup 2018 with and without cable. In fact, we will also discuss a quick guide on how you can unblock FIFA 2018 on different streaming services and watch the event from anywhere in the world.

How to Watch FIFA World Cup 2018 Outside the US

Watching the FIFA World Cup in the US is easy because almost every major broadcasting channel as well as popular streaming service operates in the US. However, when you move out of the US, you are forced to face different kinds of problems such as geo-blocks or country-restrictions.

For instance, if you try to access SlingTV or Hulu Live TV, you will be barred from accessing the content because the streaming services operate only in the USA. Consequently, there is a high chance you might miss out on FIFA 2018.

To overcome the hurdle of geo-restrictions, you need a VPN.

A VPN helps you bypass geo-restrictions and access any content that is usually blocked in certain regions. In fact, a VPN can also overcome the ISP throttling issue, which is one of the most probable reasons behind slow streaming.

What are the Best VPNs for FIFA 2018 World Cup?

32 teams from five continents are competing in FIFA 2018. Every team will be competing for the grand prize of the FIFA World Cup. There will be 64 matches between the teams played in 11 different locations in Russia, with the opening and final match being played in the Luzhniki Stadium, Moscow.

The total prize money decided for the FIFA 2018 is $400 million, which will be divided in the following manner:

Here is the match schedule for the FIFA world cup 2018:

Owned by 21st Century Fox, Fox Sports is one of the major US TV broadcasting channels. Luckily, the channel has bought the official license to broadcast the FIFA World Cup championship 2018 in the US. People living in the US can watch their favorite sports on both cable TV channel and the online streaming channel of Fox Sports.

If you are a Spanish speaker and want to enjoy all the games of the FIFA 2018 in your native language, you can tune in to Telemundo. Owned by Comcast and a subsidiary of the NBC network, Telemundo also ranks as a major broadcasting channel in the US. Similar to Fox Sports, Spanish speakers can watch the game on their TV as well as smartphones.

How to Watch FIFA World Cup in the USA without Cable

It is a fact that our life has become more hectic than ever. In such a fast and hectic life, it is not possible for every FIFA fan to make enough time on their tough schedule for watching FIFA on their TV. However, it doesn’t mean, you don’t have any other means to watch the sport and thus end up missing the championship.

You can always enjoy your favorite sport on your smartphone, laptop or tablet through online streaming channels. Here is a list of some of the most popular streaming services where you can watch FIFA 2018 live online.

Sling TV is a great streaming option for people living in the US. You can watch your favorite entertainment channels, comedy shows as well as the FIFA World Cup 2018 on Sling TV.

Hulu is one of the closest competitors of Netflix. Starting at $39.99 per month, the streaming service offers a huge number of online channels including ESPN, FS1, FS2, CNN, ABC, and more.

It is one of the leading satellite broadcasting networks in the US. Luckily, it also offers streaming service where users can watch their favorite channels and shows on their smart gadgets.

These are some of the best options that we have listed here. You can find more streaming options when it comes to watching FIFA 2018 live online.

How to Watch FIFA World Cup in the US on Kodi

Kodi is a media entertainment application available for Windows, Android and other Operating Systems. It is one of the most popular entertainment hubs because it has a vast gallery of content thanks to the add-ons. In fact, you can find any type of online content and access it for binge-watching on Kodi.

If you are a Kodi fan, you can enjoy FIFA on Kodi by installing the right sports add-on. However, the only problem is that some add-ons come with regional restrictions. To get past the restrictions, you need to install a VPN.

Apple TV is a popular media entertainment box that comes with a micro-console. You can enjoy a plethora of shows, TV channels as well as sports on Apple TV in the US. You can set up Fox Sports Go app on your Apple TV if you want to enjoy live coverage of FIFA Cup 2018.

Similar to Apple TV, Amazon FireStick is yet another media entertainment console that you can set up with your TV and enjoy all the popular and in-demand shows and entertainment content live. To watch FIFA in the US on your FireStick, you need to install the Fox Sports Go app.

You don’t want to miss out on all the exciting moments from the grandest sports event of the year, FIFA world cup 2018. If you live in the US, you can easily catch up with all the sports action live on Fox Sports, Telemundo or any streaming channel.

However, if you are a US expat living in a far away country, you might bump into limitations that come with geo-restrictions. To bypass these restrictions, simply install a reliable VPN and access your favorite content.