Unblock Streaming Channels on PlayStation Vue via a VPN

Sony’s PlayStation 4 has so far sold more than 40 million consoles across the globe. With these astonishing numbers and the introduction of the PlayStation 4 Slim and Pro in mind, it doesn’t take a genius to predict that this number will only increase with every day. Even though Microsoft’s Xbox One and Xbox One S have managed to give Sony a run for its money, the rise in competition has in fact led to the creation of several new services, like PlayStation Vue. 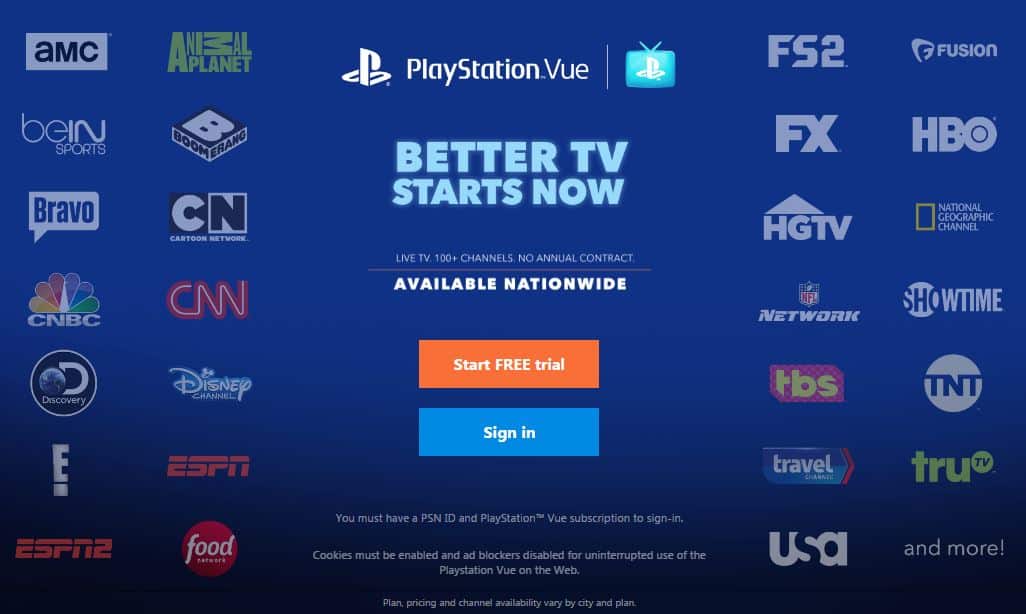 PlayStation Vue is the answer to PlayStation 4 owners who have been yearning for a streaming service of their own. If you wish to find out why and how it can be coupled with a VPN, read on.

An Overview of PlayStation Vue

PlayStation Vue is Sony’s very own television streaming service. Even though the industry is crowded with contenders, Sony is not holding back. The reason why Sony is taking such a gamble is because of its PlayStation user base, and also because PlayStation Vue is by far one of the most affordable options available out there.

To watch PlayStation Vue online, you will have to choose from one of its many different packages. The cheapest of them all starts at $30, but it does lack major networks like NBC, Fox and ABC. But then again, Sony has promised to add left-out networks as soon as possible.

To watch PlayStation Vue online with the major networks, you will have to pay an additional $10. Apart from ABC, Fox and NBC, you will get access to SyFy, TBS, FX, TNT, Bravo, Food Network, ESPN, FXX and many more. For an additional $5, you can get the core package with 15 more channels. But if you want, you can pay $55 for the Elite package, which will give you access to 100 channels that can be accessed at any given time, regardless of where you are located.

How can a VPN Enhance PlayStation Vue’s Experience

As amazing as PlayStation Vue sounds, it does have its drawbacks. Primarily, those individuals residing in different regions across the globe may not necessarily have access to all the channels being offered. There could be restrictions, but they can be easily overcome with the help of a VPN.

VPNs or Virtual Private Networks allow viewers to mask their IP address, and switch between servers in different regions. This way, if they are unable to access content in their own region, they can switch to one where it is accessible. However, there are still regions where PlayStation Vue is actually not available. To unblock PlayStation Vue viewers can sign up with a VPN, and enjoy the content that it has to offer without breaking a sweat.

At the same time, VPNs also enhance online security and anonymity, which is necessity rather than a luxury these days. Taking into account the rise in cybercrimes, it is always better to be safe than sorry. A VPN can help in this regard, and can do so much more at the same time. The possibilities are endless, plain and simple.

Can a VPN be Coupled with PlayStation Vue?

As complicated as it may seem, using a VPN is not all that difficult. No matter what device you may be streaming PlayStation Vue on, it can be configured to take advantage of a VPN at the same time.

How to get a VPN for PlayStation Vue

There are numerous VPN providers out there that will allow you to access PlayStation Vue channels. But not all of them are as effective as they should be. To find the best one, it is a good idea to look for service providers that have been industry for a long time. You can also go through customer reviews to be able to make an informed decision.

If you are still unable to find a VPN that best fits your description, here is a list of a couple of the best VPN providers that will allow you to use PlayStation Vue to stream different channels online from anywhere in the world.

Now that you know what PlayStation Vue is all about, and how it can benefit you, especially if you are a console owner, there is no reason why you should not give it a try. Rest assured, PlayStation Vue coupled with a VPN will do more than unblock the channels or the service itself, but it will keep your digital communications protected and secured at all times.